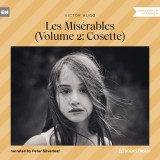 Victor-Marie Hugo (26 February 1802 - 22 May 1885) was a French poet, novelist, essayist, playwright, and dramatist of the Romantic movement. During a literary career that spanned more than sixty years, he wrote abundantly in an exceptional variety of genres: lyrics, satires, epics, philosophical poems, epigrams, novels, history, critical essays, political speeches, funeral orations, diaries, and letters public and private, as well as dramas in verse and prose.
VOLUME 2: COSETTE: Last year (1861), on a beautiful May morning, a traveller, the person who is telling this story, was coming from Nivelles, and directing his course towards La Hulpe. He was on foot. He was pursuing a broad paved road, which undulated between two rows of trees, over the hills which succeed each other, raise the road and let it fall again, and produce something in the nature of enormous waves.